Last Treasures from the Edward Wrangham Collection of Japanese Art

Asian Art for Sale – Prices given include buyer’s premium. 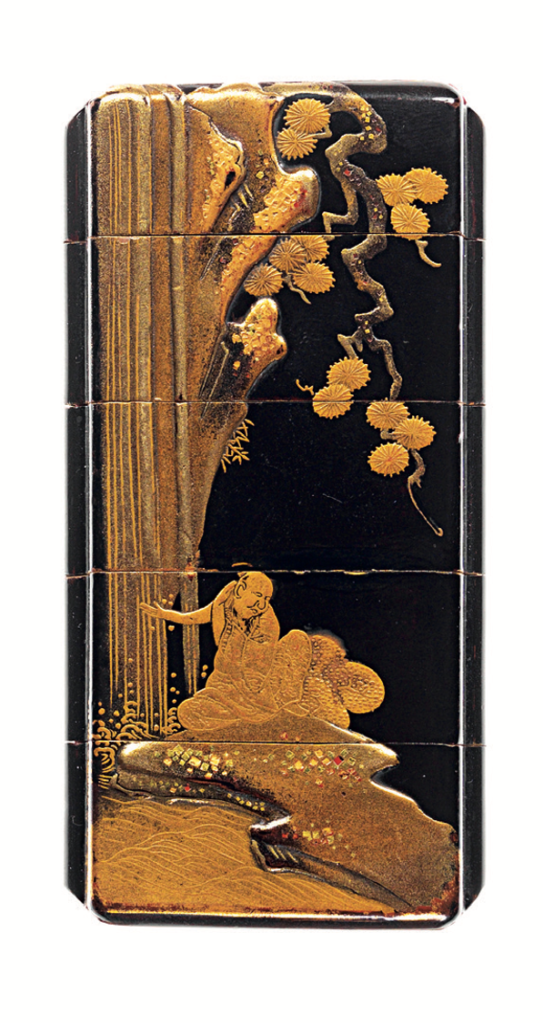 Just after the half way point in a year in which collectors and dealers have been starved of interesting Asian art for sale, along came this offering of 230 lots of Japanese art from Bonhams.  While one might question the use of the word “treasures” to describe a selection of unsold objects from the 6 previous sales of the collection, held over 5 years from 2010 to 2015, there was still enough material here to hold one’s attention, and I myself spent a contented 2 ½ hours looking through what attracted me. I am afraid to own that it means that I largely skipped over the sword fittings.

It is sad to observe that the internet, telephone bidding and now Covid 19 have killed the atmosphere of the saleroom.  Ten years ago the 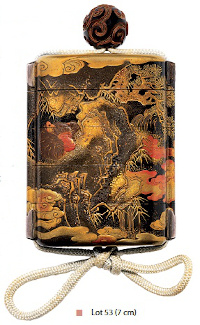 room would have been packed with people anxious to bid and see who bought what.  Instead, 3 stalwarts, including myself, sat through much of the sale, though I claim the long endurance medal for having stayed the longest, about 6 hours, while a succession of callow auctioneers spent far too long squeezing every last copper out of each lot at a rate of 35 lots an hour.  I regret that there will be no going back, and this is the new reality.

The largest section of the sale was occupied by inro and it started with a few early examples, dating between 1650 and 1750.  As is usual for such pieces, they were not in pristine condition. Indeed Ted Wrangham had a tendency to encyclopaedic collecting, meaning that he wanted an example of every possible type and technique, regardless of its state. 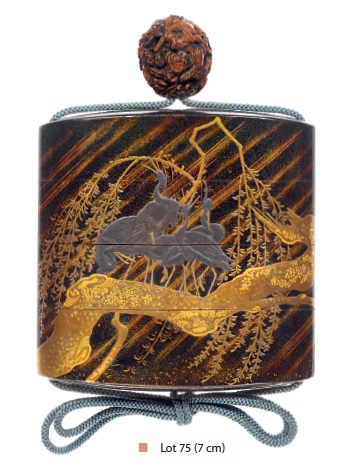 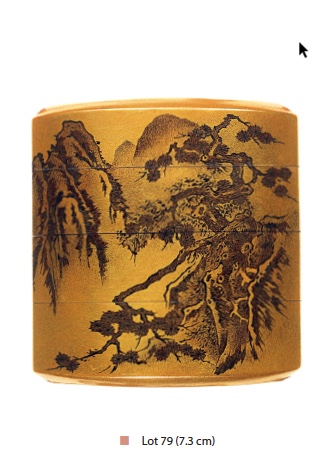 This would explain why he had the very elegant slim Kahei of Kyoyu and Sofu which had visible old restoration (lot 33. 8.3 cm £701). Most of these early inro were inexpensive.

The first inro to make a significant price was what I considered an overly worked example, lacquered with an eagle threatening a monkey by Okuda Yoshitsura (lot 53, 7 cm, £6,120). One of its silver corner mounts had been lost. The next flurry of excitement was over a run of three inro with birds by Koma Yasutada. My favourite of these (lot 75, 7 cm, £10,200) was marginally more expensive than the following lot.

One thing the sellers and Bonhams got right was not to have reserve prices on anything priced under £3,000, a point which was well publicised.  Where they got it wrong, in my opinion, was in overestimating what they considered the best inro in the sale.  A case in point is lot 79, a gold ground inro with sumi-e togidashilandscape by Koma Kyuhaku, estimated at £14,000-16,000.  I advised a client that it was good but looked expensive, and he was pleased to buy it for a hammer price of £8,000 (lot 79, 7.3 cm £10,200).  Ironically, an inro which was used to publicise the sale was estimated at half the price of the one we have just looked at, but was the most expensive in the sale.  To my mind it was a gem; by Kanshosai Toyo, it had a sober black exterior decorated on each face with a simple Satsuma mon (a cross) housing a three case inro decorated with a couple 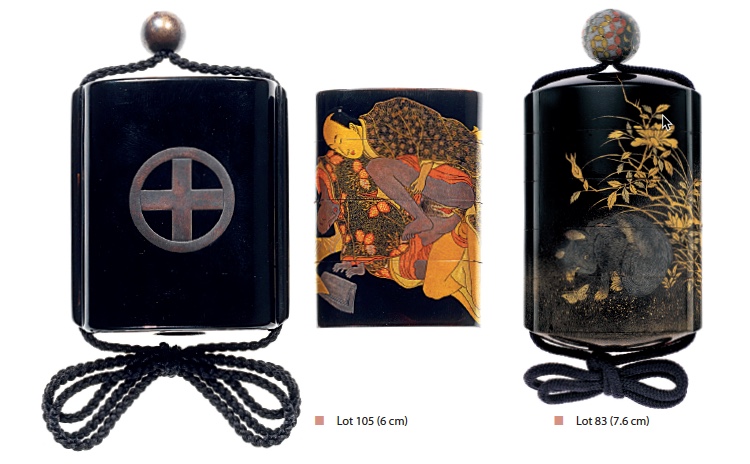 in unabashed flagrante delicto.  As the inner sleeve of sheath inro tend to become scratched from use, the condition was remarkable (lot 105 6cm £21,500).  One 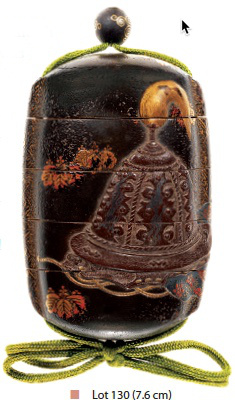 wonders why it did not sell the first time around.

Quite a few people were attracted to lot 83, decorated in excellent togidashi with a cat teasing a butterfly by Tatsuke Kokosai II (7.6 cm, £5,100). I am a little surprised that it did not go for more. Another inro which caught my attention was by Jitokusai Gyokuzan, decorated in takamakie with a Namban helmet, the sense of the iron adroitly rendered in lacquer.  Were it not for old damage around the bottom case, I am sure this would have surpassed the price it made (lot 130, 7.6 cm, £4,080). 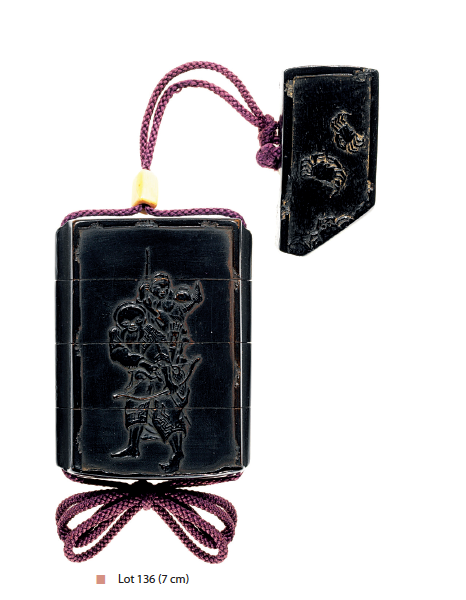 There were some decent pipe cases on offer in this Asian art for sale, a section of just under 30 pieces. For the most part prices were low, and so bargains were to be had in this less popular collecting field.  It seemed to me that there was confusion in the area we used to refer to as Asakusa.  One case was described as being in the style of Kokusai, two were attributed to him, and one was said to be by him.  As prices ranged from £765 to £1402, one is left thinking that followers of the sale were not convinced that any was by him. There again one buyer may have had a bargain (lot 172 21.5 cm £1402). Only one smoking set took off and that was a smart ensemble, 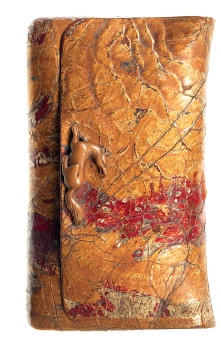 The netsuke section of the sale was fairly small and undistinguished, apart from a perfectly genuine Toyomasa boxwood drum carved with a cockerel  (lot 192, 4.5 cm, £6,375). That left a few lacquer boxes and objects to round off the sale. 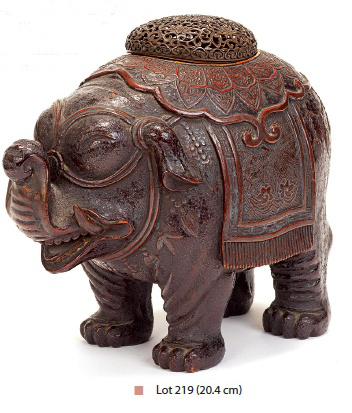 There were some attractive old pieces in this group, the one that drew the most attention being a lacquered wood koro in the form of a slightly comical elephant, the trunk of which had suffered an accident in the past (lot 219, height 20.4 cm, £11,475).

The great advantage of having an asian art sale largely without reserves is that you end up selling most of what is on offer.  Bonhams and
the sellers must be pleased to have sold all but 3 lots, those apparently withdrawn before the sale. 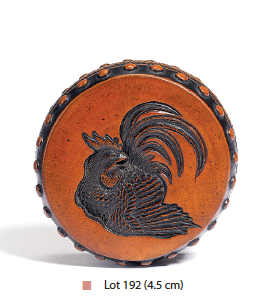